Engine Charging Systems and Use with Lithium batteries

Most charging system employed on engines for recharging the vehicle’s battery generate an alternating current (AC) with stationary coils of wire (stator), and rotating permanent magnets (see figure 1 below). The AC is then conditioned with a regulator-rectifier to create a DC current/voltage required for charging a battery (see figure 2 below). 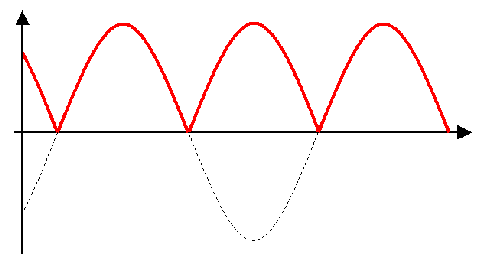 Most modern charging systems actually create 3 phase AC power which is then rectified and regulated to create DC charging current / voltage (widespread use since the 1980s). The use of three phase AC creates a DC voltage with less ripple (see the Figure 3 below, green line is DC output).

The AC producing coils are always trying to put out the same amount of power at a given RPM, which creates a problem when the battery is fully charged. Much like a hose filling a pail of water, if something is drawing water from the pail at the same rate it is entering it will not over flow, but if the water keeps coming in with none being taken out, it will over fill.

The regulator rectifier prevents overfilling a battery by shunting the coils, thus limiting the system voltage to acceptable limits (generally 14.2 to 14.6V). See the  clipped voltage output of a 3 phase system in Figure 4 below (green line).

The battery’s purpose in the system is the energy storage “bank”, a power source for starting and operating equipment when the engine is not running or at low RPM such as idle  speed. Most systems do not charge the battery at idle for the output voltage is too low. This is particularly true for LiFePO4 lithium batteries with a resting voltage of 13.2V.

A typical motorcycle charging system is shown in Figure 5 below.

The voltage ripple amplitude within the cell decreases with increasing frequency for the cell does not have time to react to the change in charge current, due to short time period with higher frequencies.

At frequencies below 5 kHz and high amplitude ripple voltage, the resultant charging current ripple introduces heating in the cells due to the cell resistance (IR losses). Note the “and” in the previous statement, for this is the worst case situation when both are out of ideal ranges.

Of the two, low frequency and high ripple amplitude, an AC voltage ripple magnitude >1.4V causes more heating. Oxidization of the transitional metal can occur with high AC ripple voltage charging at higher currents (> 1C). The oxidation of LiFePO4 occurs at cathode and higher temperatures only speed up the oxidation. The free oxygen (as a result of the oxidation) is then free to react with addition lithium causing further increases to the temperature. If not caught quickly enough, this results in permanent cell damage, and if uncorrected, thermal runaway can result.

The quick answer is no, and here is why. Take for example, the Rotax 503 engine (Provision 4; with 4 main mounting bolts on the gearbox) designed with points ignition and pull-starting. It uses a single coil (named magneto for permanent magnet construction) within the stator for auxiliary lighting power and battery charging. Since it is a single coil, it will produce one AC waveform per revolution of the engine (see Figure 6 below for an installation example of this type coil)

The Rotax engine also has a regulator-rectifier has shown in Figure 7 below (part 866-080).

The regulated/ rectifier voltage output of this particular Rotax system is shown in Figure 8 below. Note, the DC output has a low frequency (two pulses per engine revolution, 33Hz at 2000RPM) and high amplitude ripple (full charging output 14.5V).

This type charging voltage is not acceptable for a lithium battery for its large AC ripple at low frequency (< 5kHz and >1.4V) will damage the cells due to heating and plating (see the above section for lithium battery charging requirements).

Not all older Rotax engines charging systems are the same. The example given above is for a Rotax 503 (Provision 4). The Rotax 582 engine (per the Rotax manual) has a flywheel generator with 12 permanent magnets and 8 coils, so it’s charging voltage would be vastly better with higher frequency (> 200 Hz at 2,000RPM) and less ripple amplitude. A Rotax 503 Provision 8 (late model with 8 main bolts on the gearbox) is also said to have 12 magnets and 8 coils.

Yes they are. Modern alternator construction differs from the magneto type charging system presented above, for they are typically three phase with multiple magnetic poles so the output voltage is similar to that shown in Figure 3 and 4. The higher frequency AC is a result of having more magnetic poles (typical is >500Hz at 2,000 RPM) and the three phase coil arrangement with three phase rectification produces lower ripple voltage (typical is <1.5V).

An alternator uses battery/internal power to create a magnetic field (electro-magnet) within the rotor (rotating part) versus using a permanent magnet, and the voltage output level is regulated by varying the rotor’s magnetic field. This is a much more efficient method for excess charging voltage/current is not wasted in the form of heat. An alternator’s design offers an additional benefit in that the peak output current is self-limiting, for the maximum charging current is typically demanded when the battery is depleted and voltage is low. But when the battery voltage is low, the resulting magnetic field within the rotor will also be lower, and as such the alternator output will be lower. Figure 9 shows a typical alternator charging system. In addition, automatic over-voltage circuit protection is  recommended for your charging system. This is an important backup safety feature to protect the aircraft electrical system from high voltage events (typically > 16V). 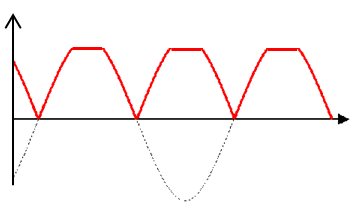 In most all cases, Yes. Modern DC Generator construction differs from the  alternator explanation above, for the output is DC by design (no rectifier circuit).  Typically, the construction of a DC generator is the reverse of an alternator, where the coils are on the rotating part (armature) and the magnetic field is on the stationary part. The DC output is created directly by using a commutator to  capture each coil’s voltage at the same polarity and amplitude. The voltage output level is regulated by varying the magnetic field. Generators do have a residual magnetism (like a permanent magnet), so they can output charge current even without a battery. Due to the residual magnetism and the regulator design, users should be aware that excessively high charge currents may be seen after engine startup and above rated speed when the battery is at a low state of charge (drained battery).