A weaker cell in series connected cells would cause an imbalance. This is especially critical in a series configuration because a battery is only as strong as the weakest cell (analogous to the weak link in the chain).  A weak cell may not fail immediately but may be drained (voltage dropping below a safe level, 2.8V per cell) more quickly than the strong ones when discharging. On charge, the weak cell may fill up before the healthy ones and be over-charged (voltage exceeding 3.9V per cell).  Unlike the weak link in a chain analogy, a weak cell causes stress on the other healthy cells in a battery.  Cells in multi-packs must be matched, especially when exposed to high charge and discharge currents.  Figure 3 below shows an example of a battery with a weak cell.

A BMS continuously monitors each cell’s voltage.  If the voltage of a cell exceeds the others, the BMS circuits will work to reduce that cell’s charge level.  This ensures that the charge level of all the cells remains equal, even with the high discharge (> 100Amps) and charge current (>10Amps).

EarthX batteries are NOT approved for series operation without engineering design and approval.  This restriction is due to the fact that impedance, capacity, or self-discharge rates vary between cells and between batteries.  EarthX offers many 26.4 volt batteries.  It is always preferred to use a single 26.4 volt battery versus two 13.2 volt batteries in series, for the single battery can internally monitor each of the 8 cells in series and ensure the charge level of all cells are balanced.

The wire and connectors used to make the series/parallel array of batteries shall be sized for the currents expected.

Do not connect EarthX batteries with other chemistry batteries.

It is important to use the same battery model with equal voltage and capacity (Ah) and never to mix batteries of a different age. 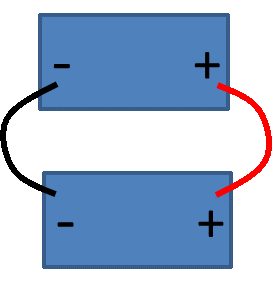 It is important to use the same battery model with equal voltage and never to mix batteries of a different age.

When connecting two batteries, it is important to make sure the charge levels are similar (voltages are within 0.3 volt) before connection.  If there is a large difference in charge level, high current can flow between the batteries.

Unlike parallel operation, series operation or series/parallel operation requires thoughtful engineering and maintenance to make the system function properly.  Contact engineering for design approval.  It is important to use the same battery model with equal voltage and capacity (Ah) and never to mix batteries of a different age.  Both batteries in a series configuration must have the EXACT same load, meaning you cannot connect a load to just one battery in the series.  If you charge one battery you must charge the other to an equal charge level.   If you replace one battery, you must replace the other battery.  See the example below for series wiring (Figure 5).

Based on extensive testing and knowledge of the cells and BMS design, our battery’s nameplate ratings are de-rated when used in parallel and or series configurations.  For example, the normal maximum charging voltage for a single battery is 14.6V, but when two batteries are put in series the combined normal maximum charging voltage is reduced to 28.8V.  When two batteries are put in parallel the continuous discharge amp rating and charge amp rating is typically reduced to 90% of the two batteries’ combined rating.

Our EarthX batteries have the capability of extremely high discharge rates and charge rates.  However, when our batteries are connected in series and or parallel we recommend you don’t exceed the values shown in Table 1 below.  Please contact us for applications using battery models not shown in this document. 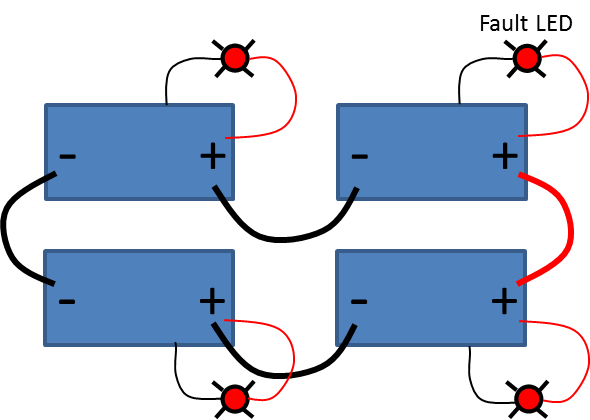